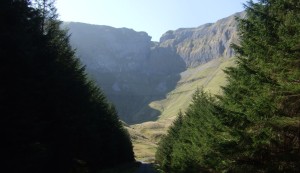 So this will be old hat to some of you. Went to see my sister in law complete the Dublin city marathon a few weeks back.

I was literally bowled over. Spectating at Mile 16 or thereabouts near Terenure so the runners were well in the thick of it. So, so many personal battles going on in front of you, you can see the pain, frustration and every so often joy on the faces as they pass. You only get a fleeting glance as they whizz pass. So many running vests emblazoned with their own name, their own charity or in memory of someone close to them. They pass in the hundreds and thousands. The encouragement from the crowd is infectious and it’s no time before you are shouting out the name of some one you never met nor will see again or calling out their county if sporting their county colours. Hopefully you’ve added something to their thoughts, taken their mind off the pain even if only briefly.

The other thing that struck me was the shapes and sizes of all the competitors. There were a good percentage that to my mind didn’t look like they were runners but were on course for a sub 4 hour run. Goes to show what i know and the old chestnut of not making assumptions based on appearances. You never see the passion, drive and commitment that precedes all that of course. No one just decides to run a marathon. I have written before about my own running exploits and I suppose a marathon is the ultimate run of runs, then you read about ultra marathons and well, where does it stop really? I’d love to think about doing one, just once but the fear of injuries, training schedules and failure is daunting. Then you go see one and it’s “oh ok time to get my shit together”

January is fast approaching and so all the gyms and pools all over the world will be inundated with new years resolutions only to be finished by mid February. But good health is for life and not just for Christmas so maybe start before the maddening crowd get in.

The main things is to do something active, run, swim cycle, surf whatever, anything to get the heart racing, the muscles tired and the brain concentrating on healthy physical stress instead of man made modern pace of life crap stress. It’s such a good buzz for body, mind and soul. Especially if you can get out into nature while you are doing it.

As the famous running shoe company logo said, “Just get it done”. I think.