Spearfishing is the art of catching your dinner. 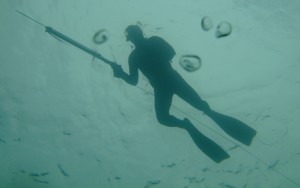 Since mankind was here on the planet he has speared and hunted fish. It received a deservedly bad name in the past due to spearfishing competitions that promoted the weight of fish collectively caught, many of which were just left to rot afterwards.

Today the modern spearo can be the ultimate conservative fisherman. He practices release and catch not the other way around. He only takes what he needs, is selective and cause’s no damage to the surrounding environment. Depending on the fish he is after he may have to stay underwater several minutes at depth or silently approach shallower fish like Mullet or Bass. He must obey the same rules as other fishermen or face prosecution. In Ireland it’s okay to use a banded speargun but a pnumatic speargun requires a license. You can see more information on the rules here.

Thankfully with most spearos I know a peer pressure system is also involved. This means while spearing a small pollock may not be illegal it will be frowned upon or taking any more than you need for the pot. There are several forums and the most active is the one on deeperblue.net  you can learn a lot from the more experienced on these forums. Unfortunatly many spearos are involved in accidents due to employing the same ocean buddy rule. So they have some one with them but they are usually fishing themselves a few hundred metres away which is no help in an emergency. The ideal safe way is one gun and float between two people. One person dives the other stays on surface and they alternate. I know this rarely happens but it should be the norm. 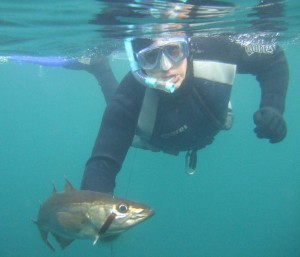 I don’t teach spearfishing as a sport and am not a huge fish eater anyway so I only do a small bit of spearing but if you are interested in learning how to do so correctly and safely please give me a buzz. We usually organise a spearfshing meet up once a year during the summer with a bbq at the end and show a movie.Keep an eye on this site and our facebook page for details. Here a few videos from the meets.