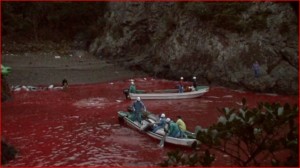 September 1st sees the traditional start of the Dolphin hunt season in Taji, Japan. Please join us tomorrow at St.Stephens Green at 2.00pm until 5.00 opp the shopping centre to show our disgust.You can see all the details here.

So a while back I had asked for help off of any teachers that might be in a position to let me speak to 6th class about the film The Cove and dolphins in captivity. The thinking behind this is pretty simple. There are concerned individuals all over the world campaigning on this. Guess what, the companies that own these parks are just that, companies. You can reason with an individual but not with a company whose direct responsibility is to its owners/shareholders. It’s the major flaw in capitalism and brains as intelligent as Charles Handy have struggled with it.

So I don’t think any of these places will shut down because it’s the right thing to do. In their opinion I am sure they think they are looking after the animals as best as they can. I am sure they have won awards for their welfare or maybe not.  One thing I am sure of is that it’s just business. So educate the children, their customers. Positive peer pressure can spread worldwide via social networks etc. Once the kids stop going, the parks reason to exist stops. Hit them in the pocket take away their customers and watch them close. Seaworld may already be feeling it due to the film Blackfish from the same people that brought you the Cove.

Anyway on this basis I asked for help and was kindly let in to an Educate together school in Kilorglin, Co.Galway. In total we had about 60 students 2nd, 4th and 6th class. I showed a few photos and videos talked a small bit and then had Q and A. The questions these kids had were stunning. At times we may look at the youth of today and despair with some of the culture and the non stop texting but I am pretty sure all generations do that. Questions varied from the bends for a scuba diver to sharks and even down to how the dolphins would need to be rehabilitated to the wild if the parks did close down. Some of the kids had already seen The Cove.

Energy levels in the classroom were high and while I was there about an hour the level of respect I have for teachers was raised considerably. Schools now back from summer so hoping to do a lot more of this in September and keep it going till we get it stopped. If you are a teacher or know of one please pass them on this info and I would love to talk at their school. I usually try and work it into the course schedule due to travel costs being what they are but all cost are borne by me. They can contact me by mail here.  I have been lucky enough to swim with wild dolphins in the Atlantic. The encounter has been repeated a few times since. But at all times the dolphins were free and able to swim off at any stage. This only made the encounter better and its the only way to interact with marine mammals.

The kids are alright. 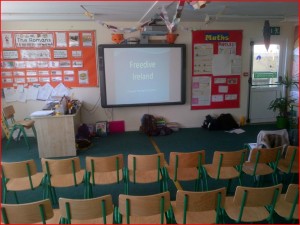